For those who have been lucky enough to come across FLexercise in the first place and then to enjoy its very special way of exercising and moving for the rest of their lives, they find it curious that other exercise regimes go in and out of fashion in the same way as do clothes and hairstyles.

Why could this be?

Is it because exercise is so inherently boring that there is a need to go from one class to another to keep the interest up?

If so, what is the magic ingredient which keeps class members with FLexercise?

Probably it’s because the FLexercise system is sufficiently fundamental to human movement that it can absorb the essence of the current trend in terms of dynamics and ethos without losing sight of its own principles. It can ‘go with the flow’, become tuned in with the competition keeping members feel sufficiently part of the trend. The ‘flexible’ in our strap line ‘Flexible, Friendly, Fitness’ encompasses not only the physical meaning but also refers to the way in which teachers have successfully adapted the system over the 91 years of its life to suit the people they teach.

Before Mary Bagot Stack launched her great new idea in 1930, exercise looked very different and group exercise barely existed. As a child (born in 1883) she had suffered a serious illness and had recovered through a physical exercise regime which restored her health. Her passion for physical fitness grew from this experience and she wanted to share it with everyone, particularly women. This was partly because of her support for the suffrage movement and because in those day’s women received no free medical services, unlike the men who got it through their employment. Her vision was to have classes full of women exercising to the popular music of the day, glowing with health, becoming more beautiful as a result. She dreamed of a League – ‘a League of Women who would renew their energy in themselves day by day’. 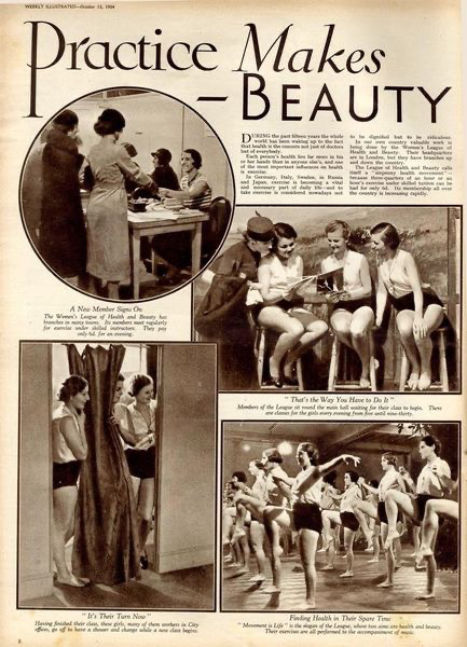 Her Women’s League of League of Health and Beauty, the campaigning charity behind today’s FLexercise, was revolutionary and women flocked in droves to the classes which sprung up nationwide and overseas.

She aimed to make the classes available and accessible to all regardless of their background and income. More than that, she believed that her exercise system, based on developing good posture and a strong core, should be the foundation only, on which to build expressive forms of movement and dance.

The combination of the Bagot Stack health system with expressive dance forms has led over the years to a fusion which is best expressed as ‘movement’ – somewhere between exercise and dance – which has been built on and incorporated in the basic technique.

Teachers will establish core stability and good posture early on in the class and while reminding everyone that it should be in place throughout, will then develop whole body movement, travelling and interaction with others.

Music is such an important ingredient that it merits a place in the list of principles which underpin the system. Not only does it measure the tempo, but it helps to create the quality of the physical movement at the same time as adding enjoyment to the experience.

The seven key principles of the Bagot Stack system:

The FLexercise classes work on the same principles today with great music being an important part of the enjoyment of exercising with others, living up to their description as ‘Flexible, Friendly, Fitness’