Welcome to the first recipe of 2021 from ‘Melody’s Kitchen’

This vegetable lasagne is ideal for using up any veggies left in the fridge at the end of the week. You can make it vegan by using a plant based milk and vegan butter for the Béchamel sauce and vegan cheese for the topping. I’ve used red lentils, but you could use a can of green lentils instead or any canned pulses.

Mix and match your vegetables according to what you have; I happened to have a rather old aubergine sitting in my fridge, but a couple of courgettes would do instead. Add colour using a carrot or two or red pepper and if you want to add greens just pop them in at the last minute so they are not too overcooked.

End of the Week Veggie Lasagne

Fry the onion and garlic in the oil for a few minutes, and then add all the rest of the vegetables except the greens or broccoli, if using. Stir fry until starting to soften and slightly brown. 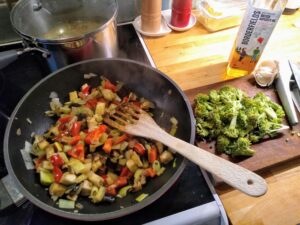 Add a can of chopped
tomatoes, half a can of water, 2 stock cubes, herbs, tomato puree and red lentils. Bring to the boil and simmer for 20 minutes until the veg and lentils are soft. Add more water if needed – the sauce needs to be thick and the lentils will absorb the water, but if you’ve used a can of lentils it won’t absorb so much, so you do need to keep an eye on it! Once it’s almost ready add the green veg and cook on for a few minutes Meanwhile, make the Bechémal sauce. I usually cheat and make mine in the microwave! Below are the instructions for two ways.

Heat the milk, onion, black peppercorns and bay leaf in the microwave on a medium heat, for a few minutes. Don’t let it boil. Remove and let it stand to infuse for a few more minutes. In a glass microwavable jug heat the butter until melted and whisk in the flour. Strain the warm milk gradually into the flour mix, whisking well and place in the microwave. Cook on high for about 4 minutes, whisking well halfway through, but keep an eye on it as it’s easy to let it boil over and then you have a really messy microwave to clean! Once thickened add some salt and grated nutmeg to taste.

Heat the milk, onion, black peppercorns and bay leaf in a saucepan to just below simmering point. Leave to infuse for a few minutes and then strain. Rinse out the saucepan and melt the butter, add the flour and cook gently stirring for 1 minute.

Remove from the heat and add the milk gradually stirring well after each addition. Keep stirring and bring to the boil, then simmer for a few minutes until thickened. Season with salt and grated nutmeg to taste.
You’re ready to assemble the dish! Heat the oven to 180C/160C Fan/ Gas 4.

I find it hard to guess how much to put in each layer so I don’t worry about it as long as I have enough Bechémal to layer on at the end. Sprinkle with cheese and bake for 30 – 35 minutes until golden. 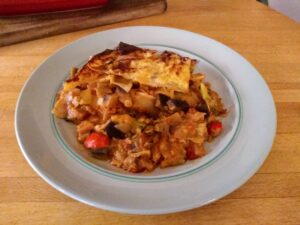 Serve with a green salad if wanted and some crusty bread. Yum! A comforting warming dish for a January evening!
I have frozen this dish successfully. Just spoon leftovers into foil trays, cover, label and freeze. Defrost and uncover before heating through in the oven for about 30 minutes. Add a little extra cheese if wanted.