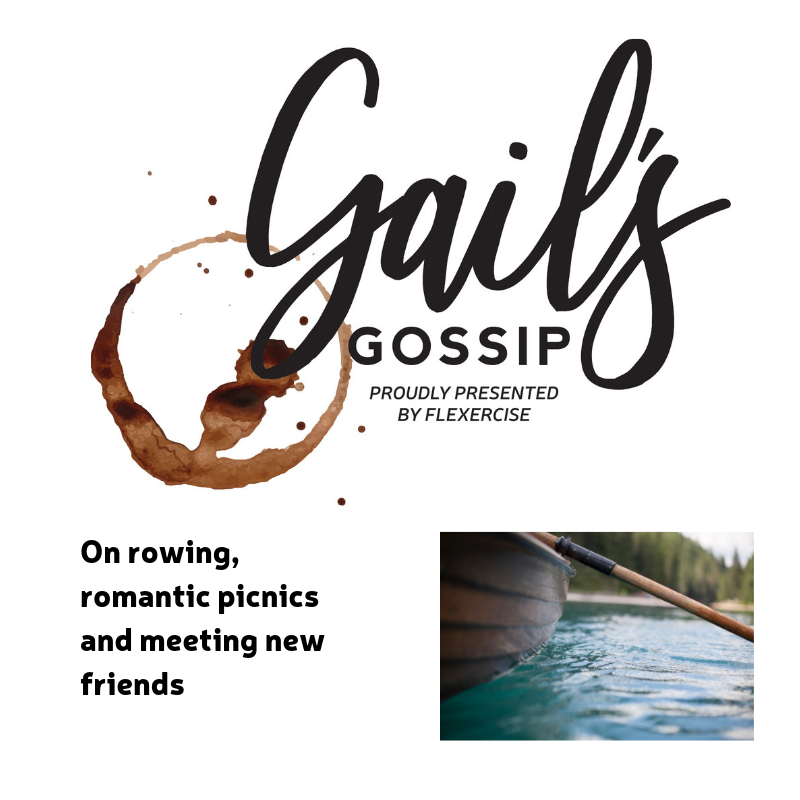 Last month, Harry promised to take Gail on a date to say thank you for looking after him after the sprained ankle incident. Today is the day….. Let’s allow Gail to take up the story.

Be still my beating heart. Harry’s sober date required me to wear layers. So, no candlelit romance then.  Possibly a muddy walk?  Hopefully not up and down hills which would be my worst date scenario. All that huffing and puffing uphill, sweaty thighs, puce-faced and then downhill with a flesh-trembling descent that requires a bra of aerobic quality.

In the end, it was a double-date, a buy-one-get-one-free affair.

The first saw him pick me up in his Volvo. Decent car, I thought. States he’s a safe pair of hands, apart from living with his ex-wife. It had a little air freshener – a cardboard whippet with fetching red eye mask. It smelt very strongly of chemical strawberries. My heap of a car is eau de dog and pear drops.

We drove to a little village nearby and down a winding lane, to a car park next to a river where a few rowing boats bobbed. Harry got out and strode to a rather large bald man, sitting on an old deck chair. He was puffing away on a cigarette and appeared to be in charge. He looked too rotund to ever step in a rowing boat.

They chatted and I thought it best to remain in the car. The spring weather was bright and balmy. It’s my favourite time. Daffodils fluttered and sparrow squabbled in the hedgerows alongside the gravelled river path. A shiny olive-green canal boat, replete with flower boxes, chugged past. The ‘Green Man’, it was called and a painting of a vine-coiled smiling face bloomed on one side. It was steered by a weather-beaten woman who looked very happy and a ratty terrier who padded around the roof. The rowing boats bobbed more vigorously in the wash created by ‘Green Man’

The car boot opened and Harry appeared at my window, tapped it and tipped his head to the boats. He was carrying a picnic basket. A proper old-fashioned one made of wicker with leather buckles. I was so impressed I was smiling for England. Harry put the basket in the boat and clambered in. There was a fair amount of vigorous rocking. I waited until this subsided before trying to elegantly step across a foot of rippling water. Needless to say, I over-balanced and Harry had to grab on to my shoulders.

Our faces were far too close for comfort at that point so I just sat down. Only to be told I was in the wrong place. There didn’t seem to be a wrong place in a rowing boat for two but apparently, my position was not at the front. No, that was for Captain Harry. I wondered then if he was one of those men who have a serious and detrimental change of personality when they put themselves in charge of anything. However, he hadn’t turned into Dick Dastardly in the Volvo so I acquiesced, carefully moving myself to the second in command berth and let him get on with it.

I rested my feet on the hamper and Harry took up to one set of oars. I held the other two but out of the water as the captain took off. Ducks waggled and squawked by the side of us as Harry row, row rowed the boat gently down the stream. I wish I’d something to give them but decided stealing from the picnic basket might have seen me walk the plank. There were walkers on the path and little children who waved and I waved back, dogs barked and a Jack Russel even jumped in, paddling his way to us for a pat on the head. The sun shone and I thought the world was beautiful.

‘If you’re thinking of rowing too, you’ll need to turn round’ Harry observed. Well, he could have told me that before we left dry land!

Resisting the temptation to shout ‘Aye aye Cap’n’, I gingerly turned myself around without standing up. No mean feat I can tell you but nothing would induce me to stand up and rock the boat. I steadied myself with my back to him and picked up the oars. They are actually quite heavy and slippery but I set too with gusto and promptly we went faster. Even more promptly, we veered to the right. Harry quickly put more effort into putting us in trim, only for us to glide to the other side. Clearly, my rowing technique wasn’t quite as good as I had hoped.

‘That’s enough,’ he spluttered. And I heartily and silently agreed.  Slowly, now, we drifted on, through surface puddles of oil like tiny rainbows leaked from barges and rowed under weeping willows that trailed in the water. A cormorant stood on one leg, as if in a bedraggled dinner suit.

I felt like Cleopatra in her perfumed barge but without the incense and a thousand guards waiting on me hand and foot. The path ended and we left behind the Sunday walkers, finally bumping into the side where Harry tied the boat to an iron loop on a gravel bay. We had a bench and table all to ourselves, barring the waddling Canada geese which put their webbed feet forward when Harry undid the picnic basket.

I settled myself with a contented sigh and Harry chatted knowledgeably about types of flora and fauna. I thought about the ceramics I could make of willow leaf patterns on bowls. He brought out the feast. Ham and cheese rolls, cheese and onion crisps and crackers with various cheeses along with a tub of creamy coleslaw.

Also, there was a half-bottle of champagne for me and a bottle of the darkest treacly stout I’d ever seen for him.

‘You like cheese then?’ I said with a smile.

‘Definitely. Give me a plate of something not bought or prepared by me and I’m a happy girl.’ The fizz was working wonders on my already happy mood.

‘I know what you mean,’ he said and with that, we ate and fended off the greedy geese. The conversation was easy, funny, in that lovely superficial way when you don’t know someone else’s relatives or centuries-old problems. An hour later and Harry stood up saying we better go.

‘What’s the other place?’ I ask as he packed. He winked and, rowing back he asked me about my kids. After two glasses of champagne, I was in the mood to talk. I talked about about how much I loved them, missed them, talked to them, planned to go and see them. As he rowed, the ducks quacked like they were laughing. The boat owner was still sitting on his chair, puffing away, reading a paper.

Chucking the basket onto the bank, Harry held out his hand. Once I was on dry land, he pulled me to him and kissed me. Then and there in the middle of the day, in front of the big man, who stopped reading. It was a very good kiss. Just right. I surprised myself by saying so too.

‘That was lovely, even if we frightened the public.’

‘Who cares,’ said Harry, brandishing gardening gloves. ‘Come on it’s time to try these for size’.

‘I’ve been drinking,’ I say by way of excuse. I no more want to do gardening at this point than visit a dentist.

He point-blank refused to say where we were going. Finally, we pulled into a field with a large tended allotment. About thirty people were standing and sitting around a bonfire, chatting, and laughing. One waved and they all shouted hello. They were so friendly and keen to meet me. Harry introduced me to so many people I lost track of names. It made me very happy and very nervous as they welcomed me as someone special in Harry’s life. The last time I had been introduced as someone special was when my first husband took me home to meet his mother. She never spoke to me civilly again.

Now here I was, amid fruit, veg and a giant polytunnel (that doubled as a rain shelter and bar) with a gang of people who were obviously keen to meet me. Sometimes, life can be utterly delicious and delightful.

Touching wood. Touching every tree in a wood.