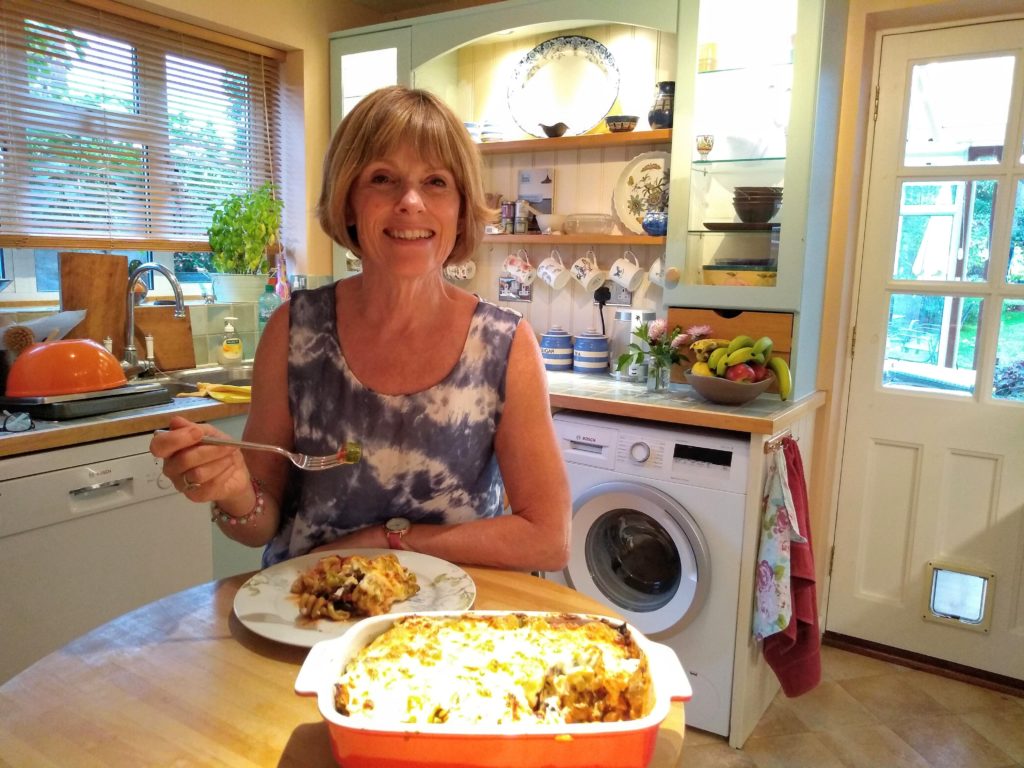 This month I’m focussing on organic produce. The supermarkets seem to be providing us with lots more choice nowadays, which is great news, although it’s a shame the organic veg always comes wrapped in plastic whereas the regular stuff you can nearly always buy loose, using paper bags if the shop provides them or by using your own bags. There’s also more choice when it comes to organic dry goods and ready -made sauces.

For this recipe I chose a fantastic tomato and basil sauce which gave lots of flavour, but you could just use passata and add your own choice of herbs. I also found these organic pasta shapes; I’d never heard of “Trottole” pasta shapes before but they are wonderfully swirly! You can play around with the ingredients in this pasta bake; use lasagne sheets instead of pasta shapes and layer up the roasted veg with the sauce and extra crème fraiche or try different veg. I think butternut squash and sweet potato would be fab! 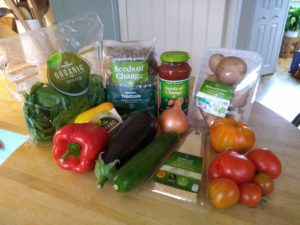 There’s a great deal of controversy over whether organic is actually better for you. A hasty look online does show that certain fruits and veg do contain levels of pesticide which can’t be washed off as they are systemic and so are within the item. I would always recommend washing fruit and veg though, to wash off any dust! All the veggies in this recipe are either home-grown by me (tomatoes and courgette) or organic from the supermarket. Of course, other brands are available!

½ red and ½ a yellow pepper, sliced or cut into chunks

400g tomatoes, halved or quartered depending on size

Heat oven to 190C/Fan170C/Gas 5. Throw the onion, aubergine and peppers into a large bowl with the oil and toss until coated. Spread the veg in a shallow roasting tin and place in the oven for 20 minutes. Next, put the tomatoes, courgette, garlic and mushrooms into the bowl and stir to coat with the oil residue. Add to the roasting tin, stir everything around and cook for a further 10 to 15 minutes until just tender and slightly charred.

Meanwhile, bring a large pan of water to the boil, add the pasta and cook for approx. 10 minutes, adding the spinach 2 minutes before the end (to save a pan!) When the pasta is al dente, use a slotted spoon take out as much spinach as you can easily get, (it will have floated to the top) squeeze dry in a colander and add to the tin of roasted veg, mixing it in a bit. Drain the pasta.

To assemble: In a medium baking dish place a layer of veg, followed by a layer of the tomato and basil sauce, then a layer of pasta. Repeat twice more (you may have a little sauce left over). Season with salt and pepper if wished between the layers. Using a spoon, dollop the crème fraiche over the top and spread out using the back of the spoon. Sprinkle the Parmesan over the top and bake in the oven for 25 minutes until golden brown. 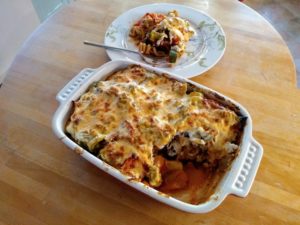 It was so yummy I had to have seconds!