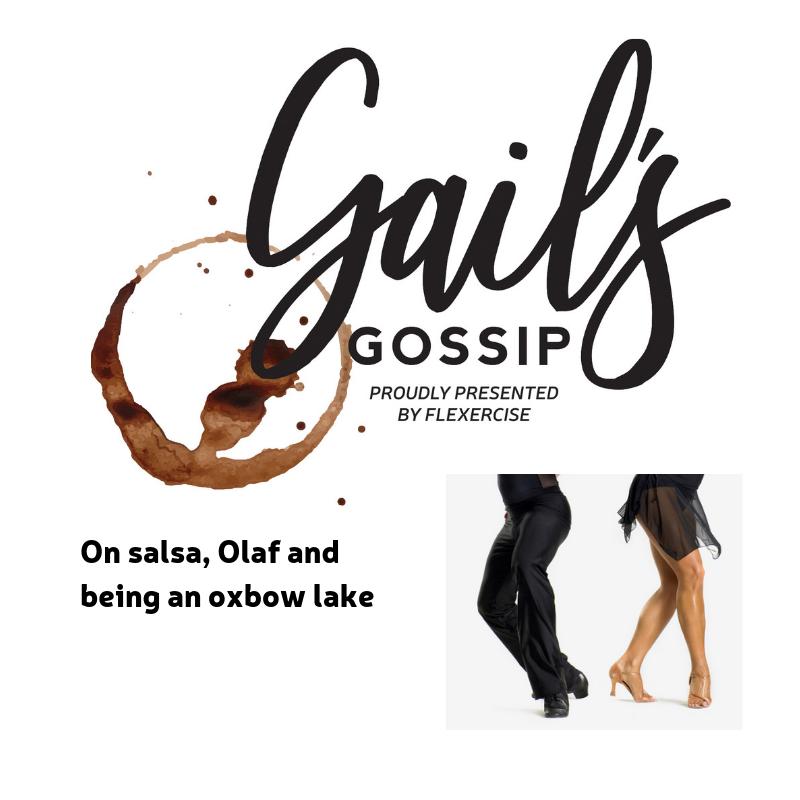 Salsa as a way of forgetting your woes? Gail is trying to square the circle of Harry and his ex living in the same house (albeit temporarily). Trust Meg to come up with an interesting way of dealing with it.

Meg hooted when I told her about Harry’s drunken antics and living with his ex-wife until she could find a new home. I was hot gossip central. In an instant, we were back to being 15 years old when we spent every waking minute talking about ourselves and other people.

‘Thing is Meg,’ I say, ‘I don’t want any kind of relationship drama in my life. Getting involved with a man and his ex-wife, not only on the scene but in his living room and God knows where else, is drama with a capital D.’ ’But, I also don’t want to turn into some kind of ox-bow lake and see everything pass me by. 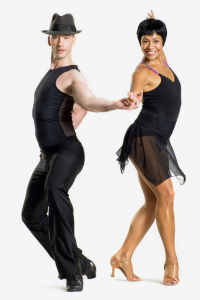 ‘Gail, come on, live a bit, say yes to new things. I wonder where he’s going to take you? In the meantime, we should carry on with our Wednesday exercise class, followed by pizza and prosecco at the Olive Garden because they have an offer on. And tomorrow night, how about we try something completely different and go to Salsa?’

‘Yes, to the exercise, no to the Salsa. I’ve got two left feet Meg, you know I have. Remember when we did ballroom dancing and I was always the last one chosen while you waltzed past looking like someone from Strictly.’

I should have realised, Meg doesn’t take no for an answer. She wants to go to the Salsa class. Sometimes, I think it would be better to say ‘yes’ immediately and avoid her running verbal rings around me until I give in.

So, here I am outside a bleak church hall and dressed, on Meg’s orders, in (not so) skinny black jeans, ankle boots with a little heel and a blouse that has a bit of shape and a lot of give.

‘Do I have to dance with someone else the first time or do you learn the steps alone? I ask, feeling very nervous.

‘A bit of both,’ says Meg, smiling and applying killer scarlet lipstick. ‘According to Olaf, the teacher, there’s lots of students in the group. It will be fun.’

‘Really?’ Meg said, preening into the mirror, putting her highlighted strands firmly in place with hairspray. I get out of the car spluttering.

‘I can’t believe you persuaded me into this,’ I hiss as she pushes open the church’s heavy swing doors. The hall is large, damp-smelling and dark. The only light comes from two glitter disco balls which throw the walls into a neon blizzard. The music is instant sunshine with a fast beat and all around the people are waiting, in little groups and couples. There must be a hundred and more than half are students.

Meg pays and has her hand stamped. It’s years since I’ve been anywhere that’s marked the back of my hand. Meg pulls me towards a giant of a man.

‘Olaf?’ Megs asks, ‘I recognise your face from the website. I’m Meg and this is Gail. She says she has two left feet but I’ve heard that’s your speciality.’

I want to kill Meg.

All 6ft 7in of him bends towards me and smiles. One of his front teeth is glimmering gold. He reminds me of a spy in a James Bond film. He wears a very sharp aftershave with hints of cleaning fluid.

‘Welcome’ he said in an accent that could be Norwegian or Danish. ‘Please relax and enjoy’. ‘I will dance with you later and show you basics but first, we have lessons.’ And off he went, stalking through the crowd like a conquering Viking.

I turned to Meg, ready to tell her I had changed my mind about embracing Salsa. But the music and booming instructions from Olaf on his headset put pay to any talk at all.

Olaf led half the room that were competent, whereas me and Meg were with the beginners and in the awful first row because it was our first time. I wanted to become invisible or at least be at the back. Lovely Liz, our lithe and bendy teacher, put us gently, if painfully, through our paces. 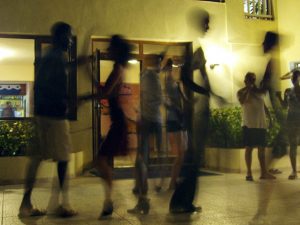 I have always struggled with left and right which, I discovered, isn’t helpful when learning to Salsa. I struggled on. Backwards, forwards, sideways and turning, often on the wrong foot. After an hour I got the first three steps vaguely right and I was fortunately dancing on my own. I was glad because I was sweating. Dancing is a fast-track way to feeling you are moving in a sauna. Meg didn’t look any better than me. Even her hair was damp and her grey T-shirt was stuck to her back and under her arms.

Then we had a break and scuttled to the loo.

‘I didn’t think it would be this hard,’ she panted whilst wiping her brow with some loo roll. She handed me a few tatty pieces. We guzzled back water and then the music started. We head out as if into battle. The men (boys) were put in a circle and we were instructed to go and pick one. Well, there was no way I was going to do that and was about to say so to Meg when she ran off like Usain Bolt and was holding hands with one of the scarce 40-year-olds. He looked rather crestfallen as there were plenty of younger women about to stake their claim on him.

3 of us were left without partners. Maybe I could sit this bit out? Olaf had other ideas, and inserted me in between couples so when they all moved on, we all got a turn.

‘5678’, commanded Olaf and off we went like so many mad marionettes, using the wrong foot, both feet, standing on feet, turning the same wrong way as the couple next to me and bumping into each other. It was absolutely hilarious. I found myself laughing, apologising and giggling as I sweated and turned and finally, once or twice glided around that dance floor with the biggest smile on my face. 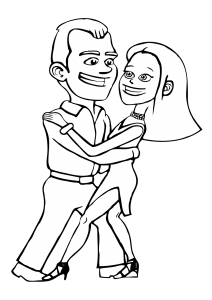 I vaguely saw Meg from the corner of my eye making just the same hash of it as me. And then Olaf came to bestow his brilliance on my beginners’ footwork. Salsa, I now know, is a very sexist dance. It is down to the man to push you from pillar to post, turning and twisting. A squeeze of his hand forward and off you go. In real life I bridle if any man tells me what to do but on the dance floor it was a rather lovely just letting go with a man who is very competent on his two enormous feet. Olaf helped me look amazing, even if I say so myself, and at long last my badly-behaved feet responded positively.

I felt beautiful even as I sweated. I completely forgot that I was prancing around with a load of students. It was a heady mix of raw dance, a great teacher and sudden sense of freedom. I couldn’t have cared less and that was a wonderful feeling. Three hours had flashed by when the lights came on and we all like fit to drop. Even the 20-year-olds

‘What did you think of that?’ I asked Meg on the way home, perspiring like an Olympic athlete.

‘No, I didn’t feel like that at all. I loved it,’ I said and Meg didn’t reply. Sadly, I thought it would be my one and only dalliance with salsa. When I got in, I kicked my boots off. My feet throbbed. Wiggling my toes, I stroked Fudge and promised him a very long walk tomorrow.

I listened to my phone messages. Two from the kids, one long moan from my mother and one from Harry. He mentioned the sober date in which he would drive and that I’d need to wear something warm, layers preferably as I might get hot.

Yes, I thought, good, because who wants to be a still ox-bow lake when you’re a long time dead.