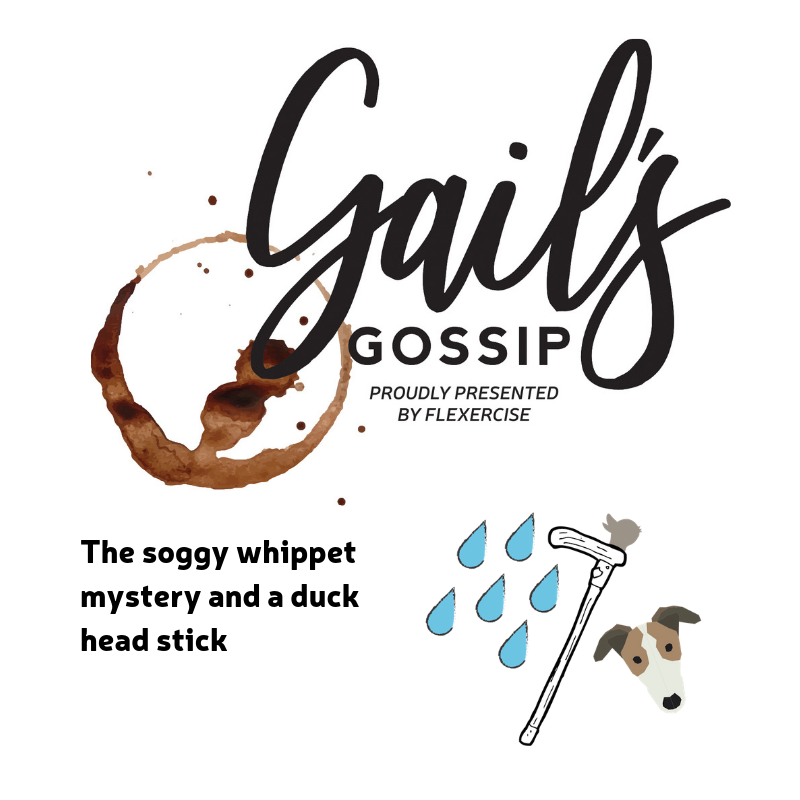 At the end of Gails last report, Walter the whippet had turned up soggy and cold on her doorstep. Now we find out why.

If you had a soggy whippet turn up on your doorstep you’d assume it was either lost or something had happened to its owner. I grabbed Fudge’s lead and clipped it on Walter.

‘Where’s Harry?’ I ask the dog. Walter looks blankly at me. Realising he may not know who Harry is I try again. I look at him encouragingly and say ‘Find Daddy’ in a tone that implies his owner is as delicious as a bone and must be tracked down. Walter trots down the path. I follow him and see Harry, clinging to a lamppost, swaying slightly as if in a balmy wind instead of a nippy, wet February

‘Are you OK?’ I ask from a distance. Harry takes a second or two to respond as if gathering his thoughts from a million miles away.

‘I won’t be tomorrow morning, or possibly the day after. I’ve hurt my ankle, slipped on the grass.’ There is a lop-sided grin on his face. The kind of smile I have seen many a time on men who are frankly, in a bit of a state. His coat is covered in mud.

‘You’ve had a few.’ I sniff. My mind begins to work in overtime. He has a long walk home and is hugging the lamp post like his life depends on it. Suddenly, he lets go of it with one hand and puffs on a cigarette. Well that’s a bit of a surprise! But then I remember, it’s another habit quite a few drunken non-smoking men seem to seamlessly slip into. I wonder why they all think they’re James Dean?

‘I’ll just rest here a little bit and then I’ll be fine and on my way.’ He said very nonchalantly. ‘I’m very sorry Walter slipped his lead and bothered you.’

I say nothing, thinking about the problem of supporting the dead-weight of a six-foot man and the likelihood of a passing police car removing him to sober up in a cell for the night.

‘You better come in and have a coffee. I’ll drive you back.’

The smell of smoke reminds me of when I was a good deal younger and a night out saw me balancing drink in one hand and ciggie in the other.

‘Nope. I couldn’t do that. I’m perfectly fine.’ He waves his hand like a conductor and does that ridiculous grin.

I take Walter back in the house and see the blinds twitch next door. Les Misérables are watching. They do little else but complain. If I work late in the potting shed, about how its light invades their kitchen and knock on the wall if I play music past 9pm. All I hear from them is a plug being inserted for daily hoovering, the odd sneeze and the weekly smell of Sunday dinner bang on 1pm. Mr Misérables is a DIY fanatic, probably to avoid Mrs M. He’s added so many extensions that it’s become a semi-detached mansion/rabbit warren for the two of them to hoover.

Well, let’s hope my current predicament keeps them going for a while.

Walter lays on the rug by the fire and Fudge snuggles up to him, happy to play host to his whippet chum. I give them each a dog biscuit and think that dogs are so easy to please….and live with.

James Dean, however, is another matter. He is wincing and trying to put his un-best foot forward. I can almost hear my mother saying: ‘For heaven’s sake Gail, leave him to it. Fancy a man of his age drinking like that.’

And Meg, I wonder what she’d say? Probably quite a lot!

‘Here,’ I step towards him and tuck myself under his left arm.

‘yeah, right’ I murmur and tug. He comes off the lamppost like a soggy beery sponge. His coat is soaked and he is very heavy. Consequently, we shuffle and stumble to the house like amateur dancers.  ‘Good job we’re not on Strictly’ I think, imagining Craig R/H’s response to our impromptu dancing performance. It’s certainly not worthy of a 10 from Len.

He keeps saying sorry and that he’d only gone out for one drink with a couple of friends but then it became two and before he knew it, he had given up counting.

‘Aren’t you a bit, err, old to be forced?’ I can’t resist saying, sounding like Mother Superior.

‘Probably’, he sighs, throwing away his cigarette. Then the tangled tale of why he lost all restraint comes pouring out in the next five slow steps. It seems he didn’t want to go home because his ex-wife had moved in for a few days. I wonder if it’s the same woman I saw him with in town?

Apparently, Valerie has sold her house and moved in with Harry temporarily while she waits for the owners of the home she’s bought to leave. A few days has turned into three weeks and he’s at the point at which friends have taken pity on him and taken him to the pub.

‘Fish,’ he said, as we struggle through the hall. I look at him questioningly. ‘Fish,’ he say again. ‘That’s how long anyone should stay with you. Three days. As long as it takes fish to go off.’

‘I’m sure Valerie really appreciates being compared to off fish,’ I say, brightly. My ex-husband had described me in far worse terms but thats a completely different conversation.

I sit him in the kitchen and tell him to take off his coat. He does reluctantly, huffily even and I place it on a radiator to dry. I put on strong coffee and load it with two sugars. He rolls down his right sock and looks at his ankle, already swelling and turning a lovely shade of purple.

‘Ouch,’ I say and search around for some Arnica cream in a medicine drawer crammed with everything except medicines. Harry slathers it on like paint. He falls quiet now. Embarrassed, I guess. And then I realise why. His gaze has turned to my pottery. Next to the anniversary cups for Meg’s parents and the Valentine present for John’s wife at work, sits the little silver van I’d made with the damn stupid red heart painted on the back door. There is nothing I can say, so I sip coffee.

I jangle my car keys, glaring at him. Normally, I would relish the thought of having Harry sit in my kitchen drinking coffee, but this is way too embarrassing.  He stands with a limp and a smile on his face. I could kill him. There is no way I’m holding him up again so I look around for something to help him walk unaided.

Then, I remember the old walking stick by the door.  I bought it from a car boot sale. I loved the feel of the duck-shaped silver handle, almost soft. Not that Harry is sober enough to appreciate the finer points of silverwork.

He hobbles to the car, using the walking stick like a weapon. I take Walter and put him in the back. We drive in silence; the kind of quiet that crackles. Harry’s spacious home, on the good side of town, is all lit up and he sighs. I swear Walter does too.

‘Thank you,’ he says, handing me the stick with a flourish.

‘No, keep it until your ankle’s better.’

‘Well thank you, and in return for your kindness can I take you out? I’ll drive and I promise not smoke or drink or complain.’

‘Nope, I’ll be the most positive person in the world. And by then my body will be a temple rather than the rubble site it currently is.’

Harry leans over, grins in a slightly tipsy fashion and says ‘ah, but you don’t know what I’ve got planned’  And with that, he gets out and hobbles to his front door clutching the duck stick like a life preserver.

A rather frosty-faced woman opens it. I recognise her from the other day in town. Little Miss Frosty fixes me with her icy gaze as she watches Harry struggle into the house. I grin at her and raise my eyebrows in that ‘you know what boys are like’ way. Then I realise she probably doesn’t.

As I trundle home through suburbia,  I think about Harry waddling like a duck to his front door with his poor sore ankle. I can only imagine the icy reception that awaits him. Clearly, there’s not going to be any tea and sympathy chez Harry tonight!

I hide the model van in a drawer out of sight the moment I get home.

Brewing a large pot of coffee, I curl up in my comfiest chair and pick up the phone to Meg knowing I will have her absolutely undivided attention.