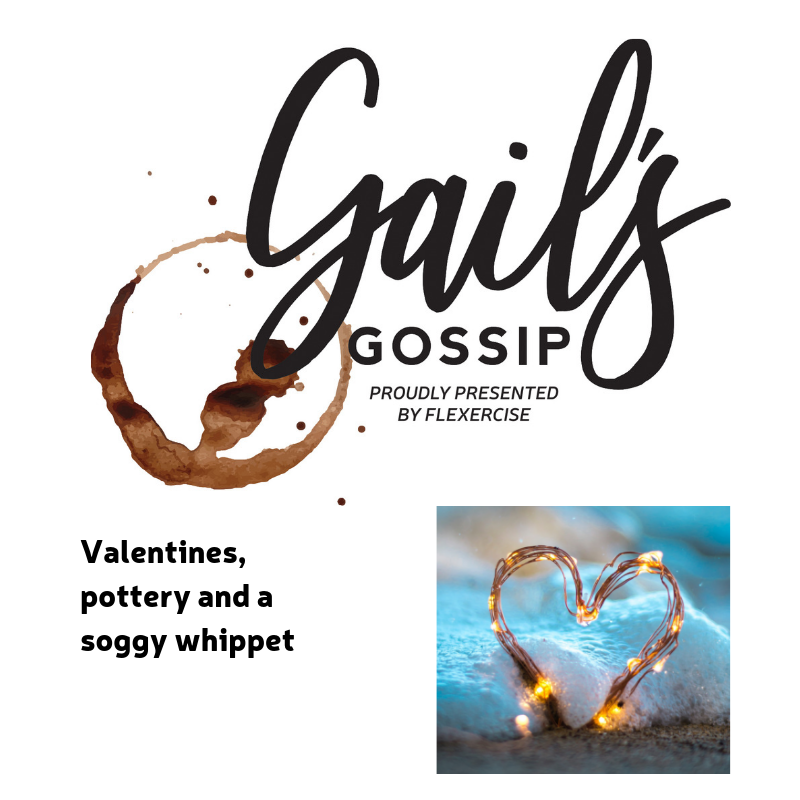 Valentines Day. Love is all around her, but is Gail in the mood? Find out more in this weeks episode.

‘Gail, can you get me out of a black hole the size of Wales?’ asks John, my colleague with his endearing Welsh lilt.

It’s our elevenses and he is standing beside me with a mug of tea so big it could be a goldfish bowl. And he’s proffering a chocolate biscuit. He must be in trouble with a woman.

‘What kind of black hole,’ I ask, taking the mug with two hands, while John looks at the floor. Balding and plump, he must be only in his early 30s but five years here has added a decade to him. I’ve noticed that desk jobs seem to give people bee-shaped bodies very quickly.

‘Well, it’s like this,’ his sing-song voice rises, ‘I forgot Claire’s birthday and had to pay through the nose for a meal out. And a new dress that wasn’t in the sale. If I miss Valentines Day I will be for the high jump. Mum reminded me.’

I smiled. I’d reminded my son in Australia. ‘So,’ he said, sipping his massive cup of coffee froth that’s left its mark on his upper lip, ‘I heard you’re a brilliant potter and wonder if you could do something nice for my Mrs with her name on and mine. And a heart? Maybe?’

I nod and sip. Valentines Day, I muse. All those scarlet cards delivered by the million along with red roses and ribbon-wrapped chocolates.

‘How much have you got to spend?’ I ask unromantically.

And my heart went out to him on the basis that what he earned at the insurance company would mean, unless he inherited very soon, that he’d be buying his own place when he was about to retire. Like my kids, only they have decided to forget it and be footloose and fancy-free across the globe.

‘OK,’ I say, though it won’t really be worth the clay and time and firing but I like John. And spending time drawing, moulding and even discarding the less than perfect is a pleasure in itself.

I walk home at 2pm and the sun is shining in that sharp bright about-to-be spring way. This morning a layer frost encased my snowdrops and crocuses and buds on the magnolia tree that seemed wrapped tightly in velvety coats. Everywhere seems full of promise.

I make a start in my potting shed. Meg’s also asked me to make a couple of cups for her mum and dad to celebrate their 50-year-marriage. Meg says it’s a marathon she’s never going to manage and even her mum states it’s a length of time few people are imprisoned for. She’s got her husband to book them into an all-inclusive Harrogate spa hotel which happily has a perfect golf course for her husband. Meg’s mother says if she’s lucky they’ll only see each other at dinner. That makes my heart sink.

I work on the romantic gifts and while they are cooling, I head for the supermarket and wade through a sea of mushy gifts on my ways to the dinner for one section. As I select a romantic no-fuss supper with free wine for my own special evening, I wonder how disappointed I would be to receive a mushy gift.

I think I’ll book the Stan and Laurel film for Valentines night because if there is ever an evening when you want to have a laugh alone, you need to plan it.

I haven’t heard from Harry since I saw him in a clinch with another woman. Consequently, I’m feeling a bit jaundiced about romance. Anyway, Valentines really for teenagers or at most the under-30s. I remember when I was 16, I got four Valentines cards, only to discover two were from my aunties, one from mum and another from someone I think was male but never found out.

Married young, Valentines Day was not about surprises, well apart from two pregnancies 18 months apart. I still smile at Meg’s story. She was 15 and madly in lust with Robert, who was a whole year older. She took days to make a Valentine card. It was about a foot tall and wide with a home-made pink envelope and card that was covered in glitter kisses (oh her poor sore lips).

We walked to his home on a little terraced street and I kept a lookout and a hold of her platform shoes so she didn’t make as much noise creeping along the gravel path. Meg suddenly looked panicked when she realised that she’d have to prop this work of art against the front door for all the passing world to witness. How on earth could she have not realised it wouldn’t fit through the letterbox?  My heart thudded for her.

Suddenly, a man turned the corner, walking a sheepdog. On seeing Meg, he slowed. With her head down, my bestest friend ran, crunching along gravel that hurt her bare feet. As she pulled open the gate, the man nodded and walked through. I crouched down and nearly died for her.

Robert’s dad beamed as he strolled past Meg who looked like she was about to faint. Sadly, she never went out with Robert. I met up with him again four years later and we would have been a happy couple except for the issue of him being gay.

So, I have made John’s bowl, blown with ruby hearts and forget-me-not flowers surrounding their names in curling writing. I hope they get their home together. I’ve painted Meg’s parents’ cups with golden names, hers – as requested with a gin bottle and his with a golf club.

I also made a little dented van, painted it silver with an oak tree logo and a heart on the back of it that split in two when the door opened. It won’t ever see the light of day. Suddenly, I heard scratching on the front door. Fudge goes barking madly to it. I lock him in the kitchen and open the door a fraction. There on the door mat is Harry’s forlorn, wet and shivering whippet.